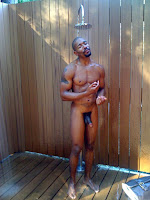 Just got back from shooting my second scene for Titan...and again, I had a fantastic time!  My scene partner was the unbelievably gorgeous Scott Alexander (seen showering to the left).  He is in Titan's new release, OVERDRIVE, which also features my buddy, Victor Steele.  I can't wait to see it!
The first day, we were in the studio and shot an amazing an totally unexpected flip-fuck on a furniture cart.  Hot hot hot!  The second day, we were on location, shooting outdoors, in weather that can only be described as spectacular for January.  Sex outdoors is one of my favorite things ever, so if the scene looks half as hot as it felt, it should be fantastic!  Afterward, we cleaned up in the outdoor showers.
Later, after a quick nap, Scott and I caught up with our buddy, Bo Matthews, for a quick bite and a couple of drinks, then went back to Bo's place and had a little post-scene celebration...  porn star style.  Yum!  Too bad there weren't any photographers around for that one.  ;)