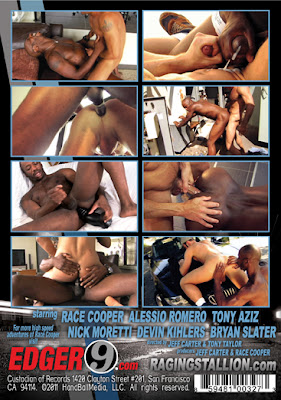 As the world spins at a break-neck speed, Race Cooper introduces you to his world of hot guys, hot wheels, and hot gay sex! Working as a personal driver for executives at "The Company", Cooper comes in contact with many a powerful client; and offers the executive service that only can come from Race. With a penchant for fast cars, and sex with an edge, Race also crosses paths with loads of horny men who can't help but be taken for a ride, or give one… and Cooper is happy to oblige! Watch as motors run hot, pistons fire, and stick shifts are pushed full throttle every week, as Race and other hot drivers get in on the action on Edger 9!Scene 1 – Executive RushRace Cooper’s day off ends abruptly, with a text for a special executive pick-up.  He rushes to meet his client Bryan Slater, already aware that he’s going to be late.  A short while later, Bryan looks impatient as Race pulls up along the downtown city street where he’s standing. Slater waste no time in chastising Race, once in the confines of the BMW. “You’re going to have to suck my dick for making me late”.  Arriving at the executive house, Race immediately drops to his knees, and begins unbuttoning Slater’s pants to start sucking his huge thick cock.  Bryan moans as he gets the full service from Race’s professional skill, and grabs Race’s head to skull fuck him.  They undress and move over to the staircase, where Bryan finger fucks and rims Race’s ass to prepare him for the ass stuffing he’s about to get.  With a slow and steady thrust, Slater drives his massive cock into Race, making Cooper moan and yell uncontrollably.  He pumps Race’s brown bubble cheeks hard, punishing him for his lack of punctuality.   Moving over to a chair, Bryan continues to fuck Race, spreading his legs apart to deep penetrate that sweet hole.  Slater is a bossy client… and wants a piece of Race in him, after using up Race’s ass. They switch with Bryan taking it doggy style for Race, as the black stud fucks with a steady rhythm.  Bryan’s tight ass opens up,  as Race starts building up speed, getting closer to the edge.  Race soon releases a huge load of cum that cover’s Slater’s back and then immediately kneels down to receive Bryan’s load all over his face.